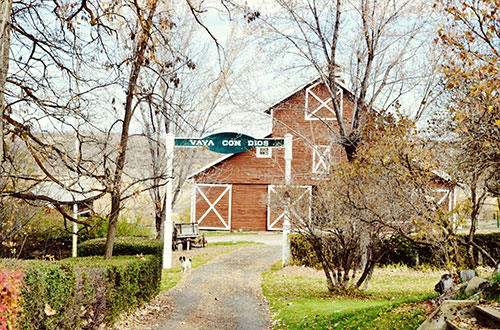 Our secluded valley, now home to Mountain Meadow Ranch California Summer Camp, was once a favorite hunting camp for the Mountain Maidu Native American tribe. As time moved on the faces of the hunters changed but the popularity of the area remained. In 1910, a wealthy bear hunter from Reno built a permanent summer retreat here. George Wingfield, who made his fortune in the Nevada gold fields, created a ranch that became the showplace of his time. At the time named Meadowbrook Ranch, people came from miles around to see his beautiful estate with his own deer, buffalo and elk grazing in the meadows.

In the 1920’s, several local businessmen turned the ranch into a country club with a nine-hole golf course meandering through the lower meadows. Then in the 1930’s, the property was purchased by cowboy movie star Buck Jones. He loved the ranch but his dream of retiring to the ranch was cut short by his untimely death in Boston’s tragic Coconut Grove fire. Hard times fell upon the ranch and it was not until 1955 that the sun would once again shine.

Upon graduation from UCLA while playing pro football for the Los Angeles Rams, Jack Ellena Sr., remembering the ranch from childhood days nearby and envisioning it as a site for the Boys Ranch Camp he hoped to create, pursued an opportunity to acquire it. Its natural beauty, abundance of space and spring water, temperate summer climate and distinctive western flavor made the site a perfect choice. Mountain Meadow Ranch for Boys was established in the summer of 1956. By the early ‘60’s, sisters begged to come and MMR was expanded to include girls. Today campers come from all over the world to enjoy a summer of magic at Mountain Meadow Ranch.

Soon enough, it became time for Jack Sr. to retire. His middle child, Jack Ellena, Jr, “Chip”, had been bit by the camp bug. Having taken a season away from camp, studying Fine Art at Cal State Long Beach, the ranch and camp beckoned. Chip returned to MMR and worked alongside his father and mother, Jacquie Ellena (née Dumbauld). Married in 1989 to local Jody Ellena (née Bertoluzza), they slowly took over management and ownership of MMR. In Chip’s stewardship of MMR, the camp grew to develop a deeper heart, mission, and philosophy to meet the needs of the generations of campers and staff. Chip introduced the heart of Servant Leadership, taking inspiration from the Mountain Maidu’s “Serve All” mentality. The values of stewardship, true listening, integrity, inclusivity, and encouragement were the backbone of this season.

As before, Chip and Jody’s time for retirement draws near and two of their three daughters with their husbands have carried on the legacy as third generation Directors: Katherine (née Ellena) and Brandon Whitestone and Anna (née Ellena) and Sam Rosenau. Under Kat and Brandon’s leadership, Chip’s legacy of Servant Leadership has thrived. The values have evolved to inclusivity, authenticity, empathy, integrity, stewardship, and mindfulness that guide each summer’s group of campers in self-growth and connection. Chip and Jody continue to be active participants of MMR, although in the well-earned advisory and supportive position with plenty of time to be with grand babies.